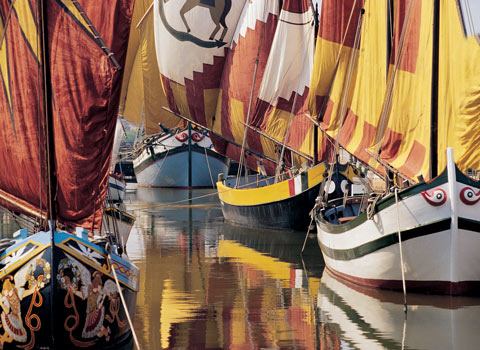 Opening times: as an open air floating museum, the maritime museum can be visited 24 hours a day

Open all year round, even if the coloured sails are hoisted only in the period from middle June to the end of August on tuesdays, wednesdays, fridays, saturdays and sundays from from 8.30am to 10pm, thursdays only on the biggest boat, Monday closed all day long.

The Marine Museum can be reached by car or public means of transport.

The Museum, situated in the oldest and innermost part of the Leonardo's canal , collects and represents ten typical sailing boats (restored and reactivated) of the high and middle Adriatic sea, used for fishing and marine traffic: the Bragozzo and the open-sea Bragozzo (small sailing-boats), the Battana and the Top (flat-bottomed boats), the Lancia (launch), the fishing Trabaccolo and the transportation Trabaccolo, the Paranza and the Barchét (medium-sized fishing boat).
The Museum, which was founded at the beginning of the eighties, is not only the synthesis of centuries and centuries of marine civilisation from Trieste right to Pescara, but is also an effective summary of the particular role of the port of Cesenatico over the years.

During Christmastime there is a traditional crib on the boats : the Marine Museum is illuminated with lights and is animated with artistic statues which tell the Nativity story in marine style.