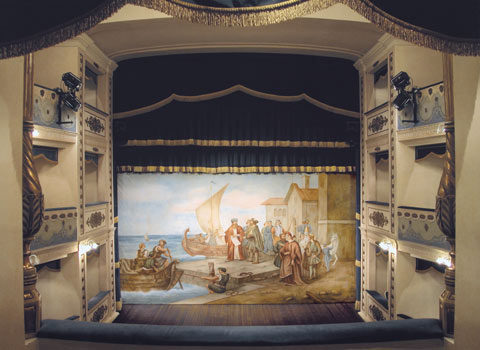 The Town Theatre can be reached by car or public means of transport.

Open all year round, the inside can be visited according to the performances and rehearsals, which take place. It is situated in the town centre, on the left-hand bank of the canal. It was designed by the architect Candido Panzani and built in two years (1863-1865). Its unveiling took place on 11/7/1865 and, on that occasion, the Town Council decided to rent the boxes to the citizens. The theatre face is in the neoclassical style. The inside is composed of a central hall with cavea shaped like a horseshoe and of 2 tiers of 15 boxes each. The decoration is a work by several artists and the original curtain represented Cesare Borgia (il Valentino) and Leonardo Da Vinci. Damaged during the Second World War, the theatre has been completely restored in function since 1992. Every year a rich theatrical review takes place from November to March.