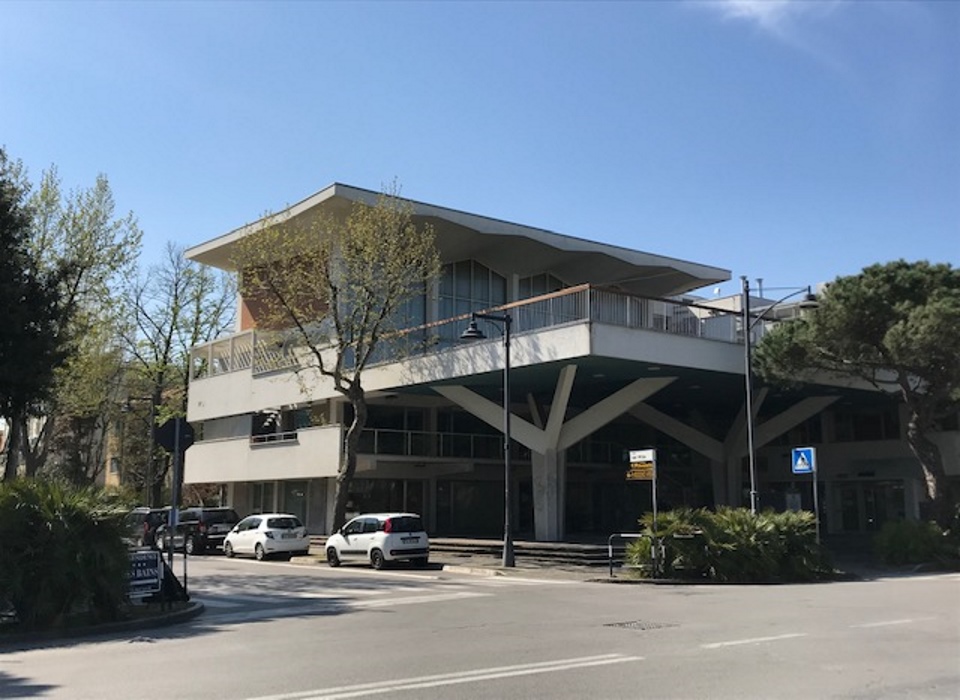 In May 1946 the Autonomous Tourist and Tourism Agency (founded in 1926) became an official institution for the promotion and coordination of tourism activities in the town of Cesenatico, already affected by a significant development in the seaside tourism industry.

In 1956 Saul Bravetti was commissioned to draw up the project for the new headquarters of the company which will house the company's offices and some services for bathers. The area is located in the nerve area on the corner of viale Roma and viale dei Mille, a short distance from piazza Andrea Costa, one of the most representative places of the waterfront, where the symbols of the city related to tourism are found: the Grand Hotel (1928) and skyscraper Marinella II (1958) Organized on four levels, one of which is a basement that houses services, the building is mainly composed of two spaces: an empty quadrilateral public space and an adjacent "L" volume.

The most evident feature on which the whole project revolves is the covered square with the water basin in the center, covered by a terrace roof supported by two arberiform pillars in reinforced concrete that support the structure, a sign of the architect's adherence to a certain organicism; the branched central stem branches into four support arms to support the roof which allows to reduce considerably (from eight to two) the number of vertical supports needed, constituting, at the same time, the characteristic element to which the image of the building, enriched by the serrated profile determined by the inclined pitches of which the roof is formed. In the first two floors there are offices and services for tourists, while in the third directly communicating with the terrace through large windows there is a double height conference room with toilets. Particular attention is paid to the use of finishing materials: the white painted plaster is embellished with marble and ceramic inserts on the viale Roma facade. The internal floors are Venetian. Free Wifi.